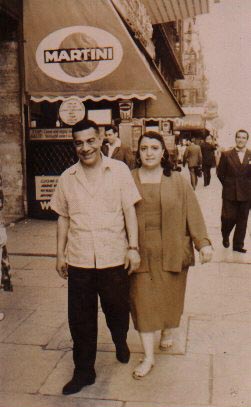 Sarrane Ferret was born in Rouen France in 1912. Like his brother Baro, he migrated to Paris while still a young man. And again like his brother, he quickly became a sought after accompanist for the top accordion stars of the day. He made many recording with Gus Viseur and Tony Murena, the first of the swing accordion players. During the war he formed his own quintet and made a number of recordings for Vogue and RCA. This group owed more to the small group American sound than to the more famous (in Paris) quintets of Django Reinhardt and Stephane Grapelly. Sarrane had a strong personality and the temperament of a leader, but his playing always shows a certain delicacy of phrasing and a lot of restraint. This has led some to believe that he lacked the technique of his brothers, but that is absurd. He was also a skilled composer and arranger. He was married to Gusti Malha’s daughter Poupee but had no children. He lived a simple life in Montmartre where he was a well-known character in his neighborhood. He died in 1970. The recordings of his quintet are much sought-after by collectors. These are quite rare but recently a few of them have been re-released. Let us hope the remainder will follow soon.