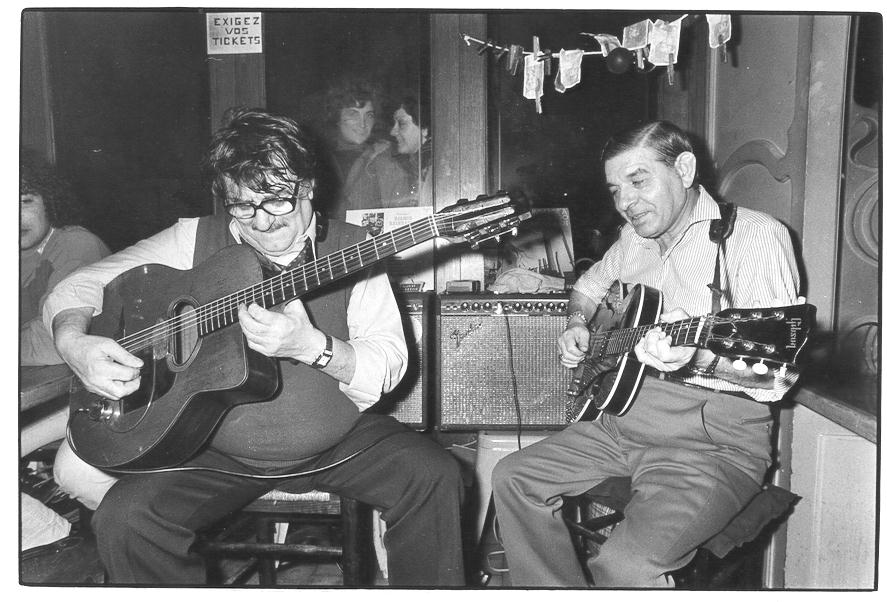 Maurice Gros Chien Ferre was born in Rouen, France around 1930. Little is known of his life. He and his partner Joseph Babagne Pouville began playing at the Clarion de Chasseur around 1960, and they played at this Montmartre café for 37 more years. Maurice Ferre has a totally unique style of playing. Though he usually used a Favino guitar, his approach was more like an electric player. He used the Stimer pickup and Fender twin-reverb amp to their best advantage. His repertoire numbered in the many hundreds of tunes. Much of the duo’s unusual sound came from Joseph’s unorthodox rhythm playing – rather than the traditional pompe, his chords had a rolling feel and he used a Gibson ES-125 instead of the usual Selmer type guitar. His harmonies were often as unusual as his rhythms. They made two LPs, and sadly neither is in re-release yet. The first of these "Le Train Gitane" is an outrageous collection of originals and popular tunes, all marked with great exuberance and droll humor. The second is a collection of tunes associated with Django. Hopefully these will soon be available for the world to hear again. Joseph Pouville passed away a few years ago, but Maurice is still living in Paris. After a few years off, he is out playing occasionally with Max Robin. It seems he is finally receiving the credit he deserves for his contributions to the Paris guitar legacy.