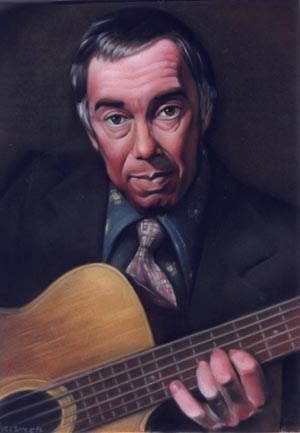 Jean Matelot Ferret was born in 1918 in Rouen, France. The youngest of three brothers, he did not wait for adulthood to go to Paris, instead he ran away from home to follow his older brothers. He was at the time 13 years old and already skilled at the banjo and violin. The famed violinist Jean Guelesco – the Czar’s violinist – convinced him to give up the fiddle and take up the guitar. Soon he was playing every where in Paris, from the cabarets russes to the jazz clubs of Montparnasse – and of course the bals-musette. Matelot was a professional guitarist and was capable of playing in any environment. He is renowned today for his masterpiece double LP "Tziganskaia", and the recording he made with Jo Privat , "Manouche-Partie", but he made many other recordings in a busy career lasting over 50 years. This master guitarist knew virtually every style of music. Matelot is often called the master of the gypsy waltz – but slight evidence exists to document this fact. In fact his oeuvre is so wide-ranging that it is impossible to discuss it in this space. Matelot Ferret passed away in 1989. He was survived by his wife Jacqueline and three sons, Michel, Boulou, and Elios. Great guitarists in their own right, the latter two can be found playing in Paris and around the world.